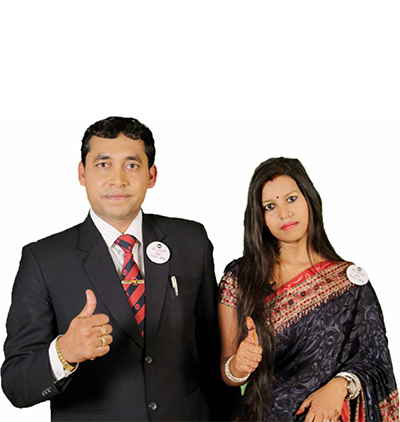 His father expired when he was seven years old and all the responsibilities came to his shoulders. He has done his graduation with B.A honors.This quote purely suits Mr. Ved Prakash Ojha who is one of the top leaders in IMC. Mr. Ojha sacrificed his family and determined that he will not return home until he gets success. We can’t even guess how has his life was without family and money. How did his life turn to 360-degreechange, let’s know.

In the winter’s end and spring starting on 28th Feb 1984 Mr. Ved Prakash Ojha was born in a small city Gopalganj, Bihar. His father passed away soon so he took all responsibility on his shoulders. After completing his graduation he wants to start a business but he had no money. So he started picking the heavy iron on his back to earn two time’s bread. Because he was pre-determined to get success, he decided to start own shop of daily use products. One day a gentleman came to his shop and gave him IMC’s Shri Tulsi to use. Mr. Ojha was influenced by using it and he wanted to know more about product and company. In a meeting, he met Mr. Satyan Bhatia and influenced by his mission and vision. Now the goal was clear, he was just needed to fly. On 4th november 2013, he took a pledge that he will not return to the home until he gets success. His heart dithered a lot to meet the family but he was determined that he will return only after being successful. After 6 months he reached the chairman level and started earning more than 3 lakh and on 1st March 2016, his name was listed in the Crown President’s row. Today he has fulfilled his all dreams with luxury cars and property not only in India but in foreign also. His family is living a happy life.

"In his message he says, Network marketing is for everyone, but everyone is not made for network marketing. This business is only for them who are willing to sacrifice everything until they get success. This is the business of determination and motivation. Invest your time and get the return in the face of success."