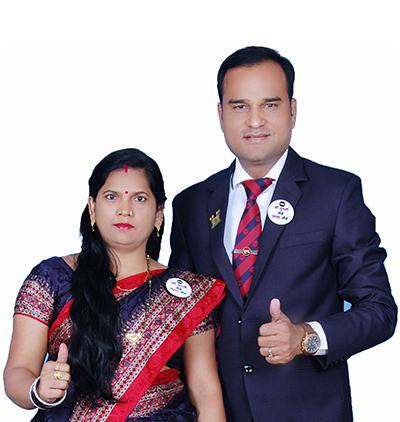 As long as you have the hunger for success, you will always have the power to get within you to achieve it. Mr. Keshav Rawat is one of those who always had hunger for success. He faced a lot of difficulties but he never has shown his back to hard work and finally, he became successful in IMC. How did he inspired himself and got success, let's his story know in his words.

In Gorakhpur UP, I was born on 20th July 1982. I grew up under the care of my father Mr. Dena Nath, (a former government employee) and mother Mrs. Shubhavati Rawat. My earlier life was not so easy because I got married at an earlier age, so expenses were increased. So, I used to sell the kites on the footpath. Later on I started the job but still, my income and expenses were unbalanced. One day Luckily I went to the Hardwar with my friend. There was a seminar, I attended and influenced by the company’s MD Mr. Satyan Bhatiya and Dr. Ashok Bhatiya. Now I wanted to know the concept of the company so, I met Mr. Ved Prakash Ojha. On 6 November 2014, I started this business and Mr. Ojha helped me to get success. I started using IMC’s Products, started attending IMC’s meeting and seminar. And this turned into my success on 1st March 2019, I achieved not only top-level but also dream car BMW, foreign trips, dream home and prestige that was my dream and still it is the dream of many people.

"I would like to tell you not to spoil your present by worrying about tomorrow rather make the plans to improve your today and work on them. Your every effort will pay you according to the right time. You have to keep patience and start doing open home meetings, be the first user of the product and follow upline and system"