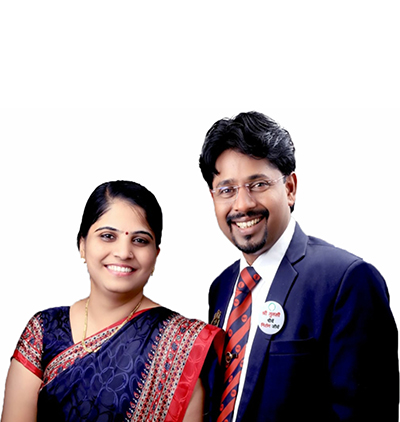 Dr. Partap pawar born in a small village of Pandharpur, Maharshtra. He belongs to the middle-class family and his father was a teacher. He did his primary education from his village and after that they shifted to Pandharpur. From his childhood, he wanted to be independent for his all expenses. Following this, he started to sell lemon candies along with his friend when he was studying in school.

His father wanted him to be teacher like him, but his vision was all clear to be doctor only. To accomplish his aim, he even asked his father to sell the property of his share so that he can become a doctor. He did his study of medical from Kalidas Ayurvedic Medical College

Then he opened his own clinic in Pandharpur and also started to work in ICU at night. After practicing Allopathy and Ayurveda, he opened his own hospital along with his wife who is a gynecologist. Though they were gaining good amount of money, but there was no rest, they work for day and night. Meanwhile this, they failed to find contentment and happiness in their life.

Once a person came to me who changed my entire life, and it was a day which proved to be a turning point in my life. A Gentleman Mr. Raj Sharma came to my hospital and introduced me about IMC. He also adviced me to use the products of IMC. But at that time, I was totally frustrated from network marketing industry and did not want to listen anything from him.I criticized network marketing and asked him to go away from my cabin.

But before going, he gave me Shri Tulsi of IMC at free of cost and suggested me to use it atleast once. After using it for fifteen days, I was fully astonished by watching it’s miraculous benefits. Then I started to make use of other products of IMC too and took a firm decision to associate with IMC business.

In 2015, I started my business in company and just within eight months, I attained the Chairman level. It was a time when I became completely dedicated to IMC. By achieving different levels, finally I reach to my target of Crown President in 2020 and today I am owner of two luxurious cars. IMC has made my life easier and I spent most of my time in IMC Business only. Today I have enough time for myself and my family to live a life of my dreams.

By giving suggestion to other assocaites, he says, “ If you really wants to be successful in IMC then you have to believe that IMC is your own company, you should work hard for its success.”