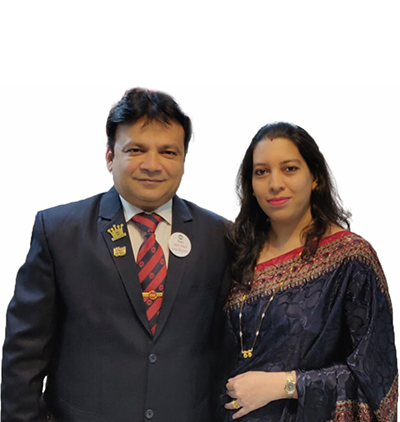 The name ‘Dr. Anand Bajpai’ doesn’t need any introduction. Because this name is well known for his nature that is Among the happiest, hardworking, helping others and determined towards their goals. Serving poor people and educating them is always been his first priority. This quality brought him in the list of top leaders of IMC who achieved a prestigious level. Let's know about this great personality how did he reach this level and how did he change his life along with other's life.

Dr. Bajpai was born on 25th August 1972, in the city of dreams ‘Mumbai’ with a lot of dreams. But his family was such that he could not help him financially but always stood with him to fulfill his dreams. His serving nature brought him in the filed of Doctor so he completed his D.H.M.S., C.C.H, and C.GO.’s degree and opened a clinic. His passion resulted in the form of three other clinics. Mr. Prem Kumar who was his old friend, one day suggested him to start IMC and given him some products. Being a doctor, he first wanted to try and test these products. So he did the same and the result was 100 %. He was influenced and From 10 March 2014, he started sharing IMC named health and wealth in small villages of Maharashtra. This initiative reached him to the top level of IMC on 31st March 2018 and today he has a luxurious house, expensive cars and all the comforts of life.

"You have to keep two things in mind that is the first thing is that you must learn before earn. Take the training of the products and use them, do meetings and attend seminars. This business is about learning. As much as you will learn, you will be able to make people understand the concept. The second thing this is not a business only. It is a profession and every profession takes the time of at least five years to be mature. So, keep patience and work until you get success."