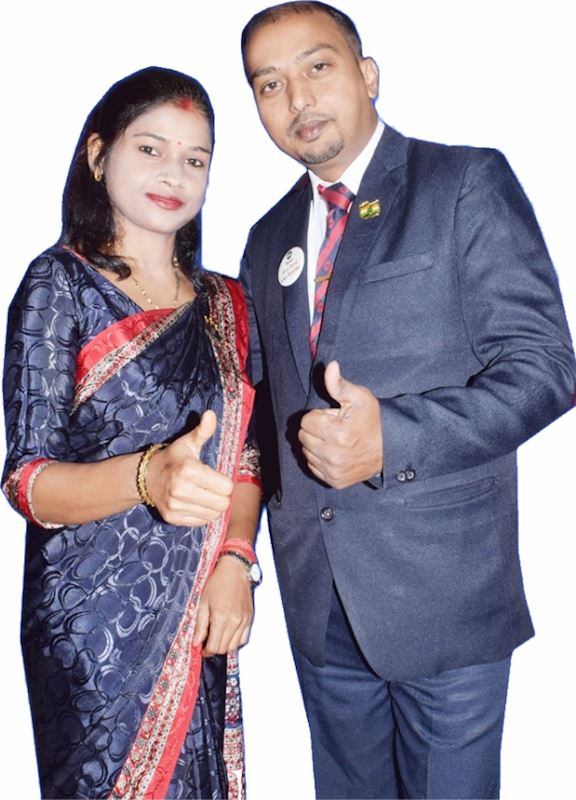 Mr. Ajay Jaiswal was born on 20th August 1988, in Jorhat, Assam, in a modest family.  His father’s name is Kamakhya Prasad Jaiswal and his mother’s name is Kailasi Devi Jaiswal. Although his father used to sell vegetables on footpaths to earn the money for two times’ bread. The vicious cycle of their poverty was the greatest issue. He started studying but due to the poor situation, he couldn’t complete his studies and at the age of study, he started helping his father on the footpath selling vegetables. He was just 19 years old when he left his study and started working for his family’s livelihood. After working so hard, he used to earn only 2000-2500 Rs. monthly. Which is not sufficient for any expense.

Time flew by, in the year 2015, one day he received a call from a social media friend. He offered him IMC Business. Mr. Jaiswal thought, from this business at least he would be able to earn ten thousand monthly.

However he started this business in June 2016, but he was not aware of the power of IMC Business. When he come to know about the power of IMC business he started giving his hundred percent. Now he was ready to fight with the challenges of his life. In the initial stage of this business, there was only two product distributor in the radius of 180 km and 200 km. He used to go 180 km to buy the products for further supply.

The dreamer for earning ten thousand rupees got his first income nine rupees only, but he was determined to convert these nine rupees into the millions. He worked hard, He broke the first level within three months. In the year 2017, he reached the first step of success i.e. chairman level. Later his hard work paid him. After breaking chairman level, he consistently started earning 1.5 lakh monthly. His income never went below this amount.  In the year 2018, he broke the ambassador level, and in 2019, he achieved the next Crown Ambassador star level. His success fruit kept pushing him for the next level and in November 2021 he flagged the success in the shape of Crown President Level.

His wife, Mrs. Anita Jaiswal supports him like a backbone. She is the only one who always stood by his side in his hard times. Today he dedicates his all success to his wife. His children are enjoying the life that he always dreamed of. Today he is enjoying his luxurious life through IMC Business.

After starting this business today he owns two cars and a Royal Enfield too.

Mr. Ajay Jaisawal has a team of twenty-five thousand associates in which there are 21 chairman stars and 5 Ambassador stars in his team as of now. He has become the mentor of many people.