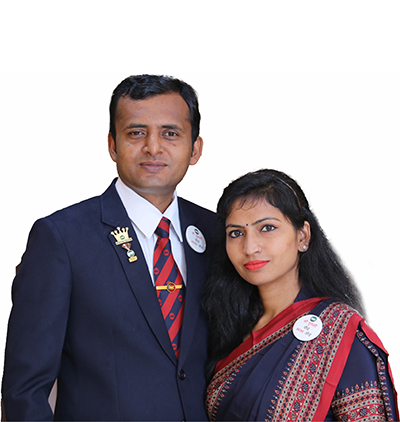 In order to increase the jewel's pride, diamonds are studded in jewelry, and the diamond doesn't need any testimony to prove it's texture, shine, and beauty, our IMC presidents are like brilliant, shiny and beautiful diamonds for all of us, whose value cannot be judged. And when it comes to Kohinoor, it can only be called prized. Similarly, IMC's first Kohinoor Mr. Prem Kumar, who has a different personality in IMC, how he carved himself into Kohinoor, let's know.

During an interview, Mr. Prem said that he was born on August 17 in 1981 in Delhi. His father’s Mr. Anoop Laal Singh is a former govt employee. Recalling his earlier day their financial condition was not so good. So he did metric hardly and started earing at the age of 16. In 2006, he got married to Ms. Kavita Kumari.

He tried his luck in the business of furniture, but success could not be found, after which he started a job. One day he met to MD Mr. Satyan Bhatia by luck and Mr. Bhatia invited him to sell the IMC Product. Mr. Prem started earing thousands daily. In a very short time, he earned thousands of rupees, so it seemed to him that his dreams are coming closer so, he decided to do this business with a serious heart. In November 2012 he started the business and with his hard work and determination, he became the successful leader of IMC on 1st April 2017. He broke all levels and achieved the pride of being first Kohinoor in IMC.

"Being the top leader of IMC he is an inspiration for all IMCian. People always seek to get inspiration from him. In his words, he says if you want to be successful in this business, you must keep following up of the new joining, don’t leave in between. Keep updating your team about new updates of the company. Because the strength of the floor is in its foundation. Home meetings and seminars will help you to learn about the system. In this way, you can get success in this business."